skip to main | skip to sidebar

Hello everyone.
I haven't posted in a while but I continue to sketch and walk daily. I noticed that many of you have taken a step back from your computers for the summer also. Just why I don't have the time to post daily is a baffled to me but I keep thinking that I will get my life back soon and be doing just what I want to do. Paint and sketch, Paint and sketch and then Paint and sketch some more. Here is some of my work from the last week.
Have a great weekend.


I found this Giant Bird of Paradise plant to sketch while waiting for someone to get out of the doctor's office. Finally it wasn't me in there. She was getting a Colonoscopy. This is such an important test for anyone over 50. The test showed no cancer or polyps or anything bad. Next test will be in 5 years for her. What better reason to have the test then to prove that your health is good. 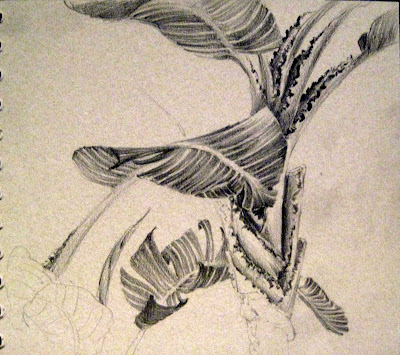 Bird of Paradise graphite on paper
These ducks were so interested in what I was doing. I had walked around Balboa Island, sketched a in a few different places and found that they had followed me the last few drawings. Do you think it might have been the sandwich I was sharing? 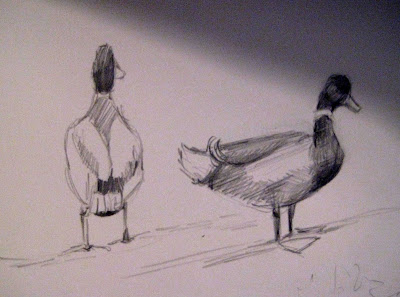 Mallards graphite on paper
I have been working in my garden in the early morning because of the heat of the day. My first pumpkin has grown and turned orange now but this one is the smaller one and is still yellow. The same color as the blossoms. I have been using these leaves for the cement leaf workshops I have been having. Great fun and so easy to do. I am going to be making many birds very happy with all the bird baths that are being made. 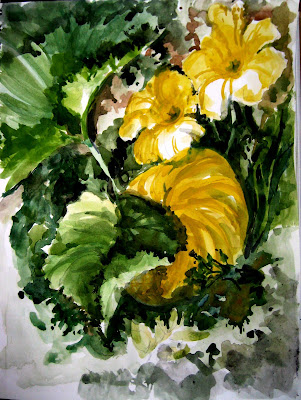 Pumpkins with Blossoms watercolor on paper 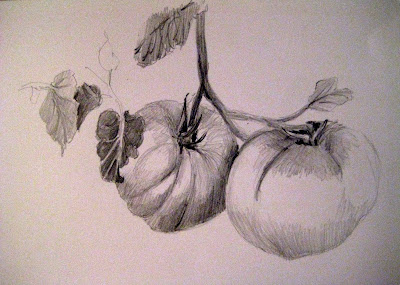 tomatoes graphite on paper
I have been harvesting tomatoes twice a week and the crop is enough for a few families. Composting and worm composting really works. 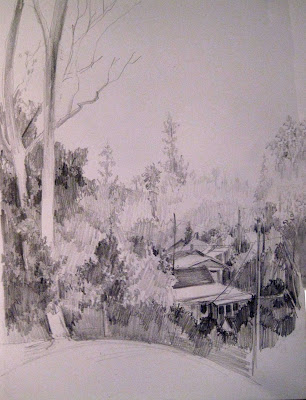 This is my Sketchercise sketch for this morning. This is on a hill in Fullerton looking toward Knott's Berry Farm amusement park. The morning was a little hazy today, over cast because of the marine layer coming in from the beach. It cools the air, keeping the heat down. Today it was only 83 degrees and that is bearable. OK, have I mentioned that I don't like the heat?
Posted by Pat at 9:11 PM 8 comments: 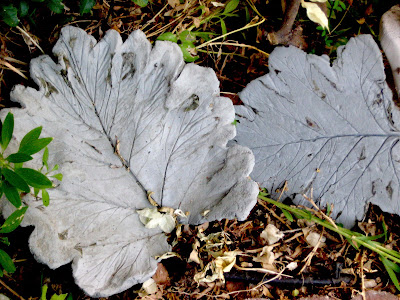 We turned the leaves over last Wednesday and removed the leaves, sand and any casting debris. 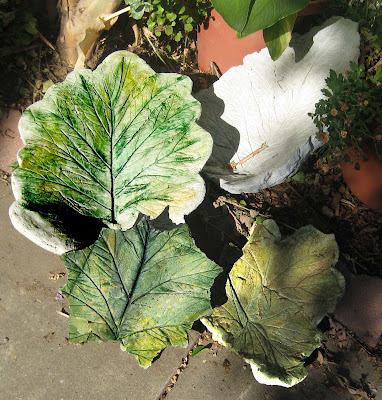 Yesterday we painted the leaves. Here are some of the results.
Posted by Pat at 12:35 PM 8 comments: 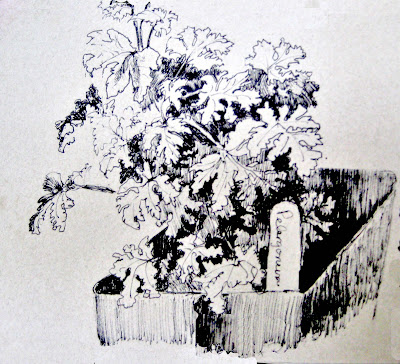 These are the new Pelargoniums that I got for the back yard fountain area. I need to make one more leaf to complete my fountain and then find a pump and I will be ready to install. The plants are going in tomorrow. I hope! 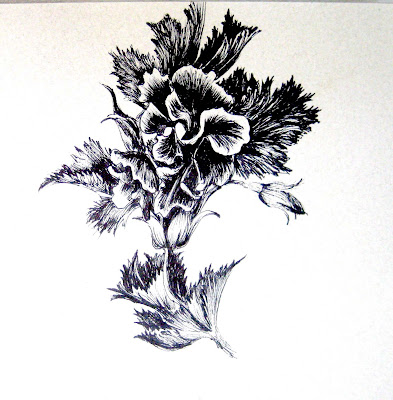 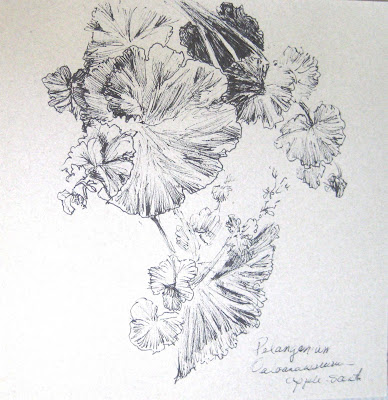 This is an apple scented geranium that I sketched during the lectures presented during the IGS meeting. I can't sit still for very long before I start to draw and if I don't have the 'proper tools' I have been known to use anything including the 2 crayons that are given to children in restaurants (ususally red, blue or yellow and not all three, only 2). This sketch was a blue ball point pen. Then I found my Sharpy. 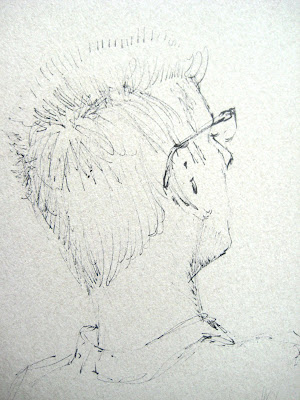 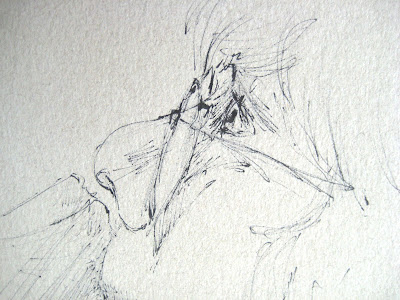 Sorry, guys, if you recognize yourself, just don't admit it. No one will ever know. 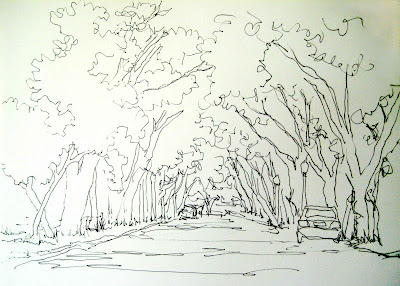 I walk through these trees during my morning walk. The street sweeper comes on Wednesday mornings after I have walked, but while I am walking the street is covered by these wonderful violet purple flowers. Everything has the same purple glow. I will be painting this sketch tomorrow. Today I am conducting the second and last day of the concrete leaf class so I couldn't take the time to paint it today.
Posted by Pat at 8:47 PM 11 comments:

This is the 23 Sketchcrawl where fellow artists from all over the world sketch where they are and what they are doing that day. 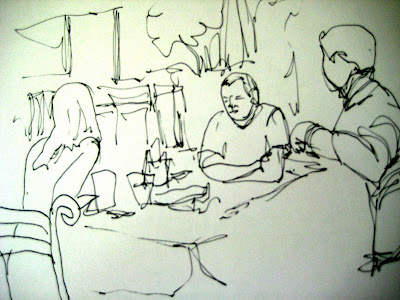 I started out with a walk to the nearest coffee house for a cup of coffee and a quick sketch. Then walked back home to get my car to drive to the train station to pick up a friend.
I stopped to do a quick sketch of Harbor Blvd. a main street in downtown Fullerton.


I captured the El Camino Real sign and the bell that is displayed along this famous old trail. It is a 600-mile (966-kilometer) California Mission Trail, connecting the California's 21 missions. 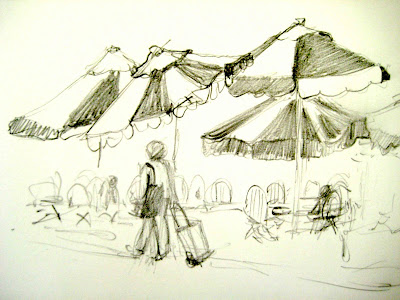 Then off to the Fullerton train station for a few quick sketch of people, luggage and umbrellas. 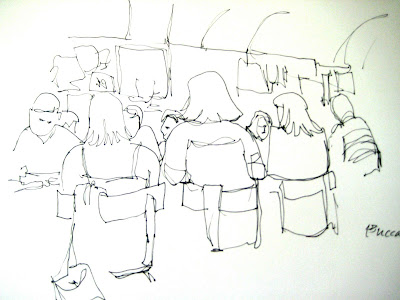 I ended my day with dinner and one last sketch at Bucca di Beppo, an Italian food restaurant.
Posted by Pat at 9:27 PM 5 comments: 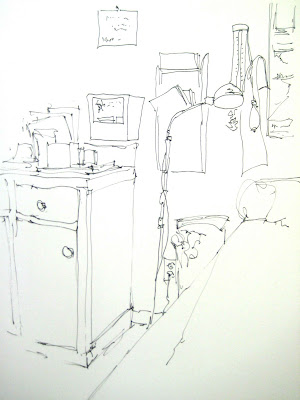 Here is yet another special look at the inside of a doctor's office. I wonder, do all doctor's offices look pretty much the same? I am getting my 50 thousand mile check-ups.
Posted by Pat at 3:18 PM 1 comment: 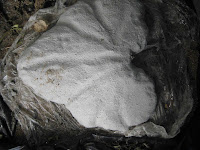 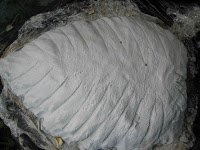 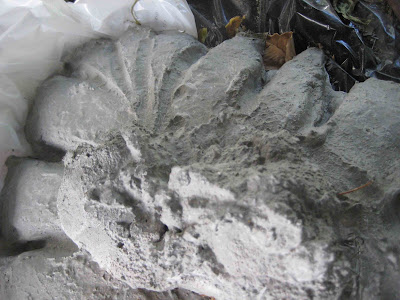 The Wednesday class this week and next is concrete leaves for garden ornaments. It was great fun and everyone was playing with concrete and sand for hours. Here are some of the results and I will post more after the concrete dries.
Posted by Pat at 3:15 PM 1 comment: 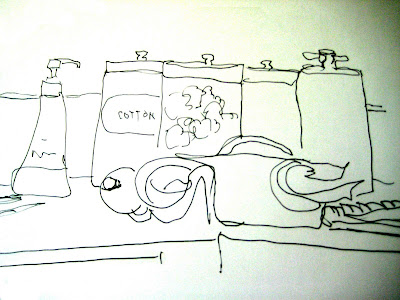 Seems like now that I am going so often many of my sketches are of Doctor's offices. Here is one from inside a room waiting for the nurse to draw blood. Just some jars. Could be small and cute on your bathroom counter, but they take on a different feel when you know they are doctor's office stuff.

Here it is the dreaded "Doctor's Office Scale"
Posted by Pat at 4:00 PM 1 comment: 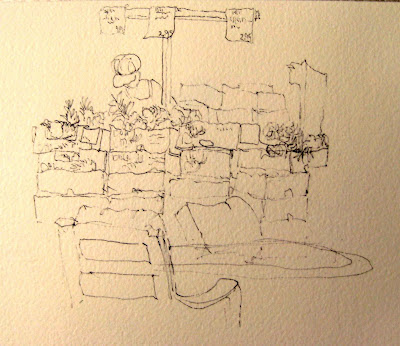 I have been trying to walk more so I have started either walking to the store for groceries or parking the car as far away from the store as possible then walking to the store. Sunday I went to Costco. It was the day after 4th of July and I had no idea there would be everyone in the world in the store. Who knew? The lines were a 20 minute wait at least. So I found a nice place to sit on some display furniture and pulled out my sketch book to pass some time till the lines got shorter.
This is a sketch of the pineapples stacked boxes and some of the display furniture.
Posted by Pat at 12:04 PM No comments:

The tomatoes are turning red now, squash and greens are abundant. The garden is so satisfing. I did my part with composting and tilling and planting, but it is such an amazing thing to see hard work be so productive. 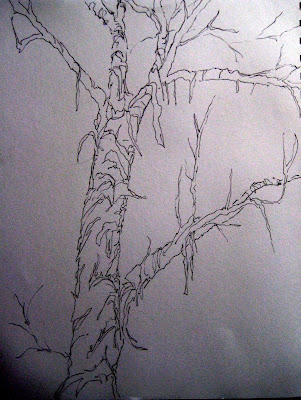 I can't seem to get a good picture. 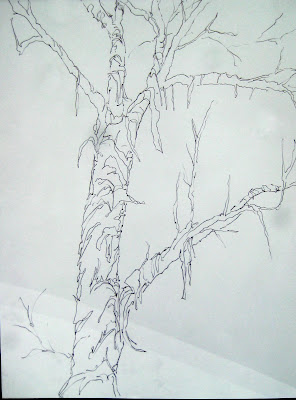 This is a eucalyptus tree that the bark peels off paper like during this time of year. I did a fast sketch during my morning walk and have plans to go back and do a more complex rendering.
Posted by Pat at 12:37 PM 4 comments: 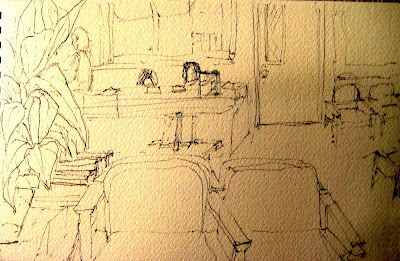 Just another day at the doctor's office.
Posted by Pat at 12:24 PM 2 comments:

This is a rock off the Dana Point cove. I spent the day painting and sketching the waves breaking into the cove. After the sun moved past the cliffs I moved my chair to get a good view of this rock and the pelicans. 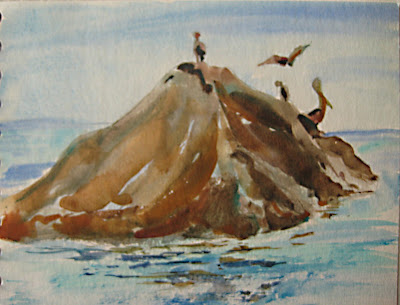 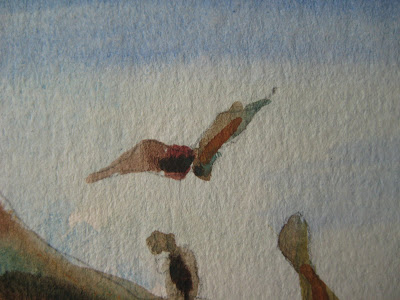 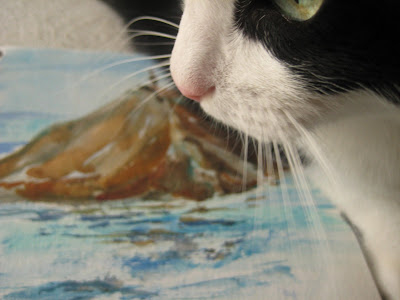 Everytime I pull out my camera and set art work to be photographed, Sam comes over to see what I am doing. It makes it difficult to take pictures.
Posted by Pat at 1:54 PM 4 comments:

Give a Grayhound a forever home. Click on the picture and go to the Greyhound Rescue site.

All my works are protected under copyright laws. If you see something you like, just ask and it can be yours.